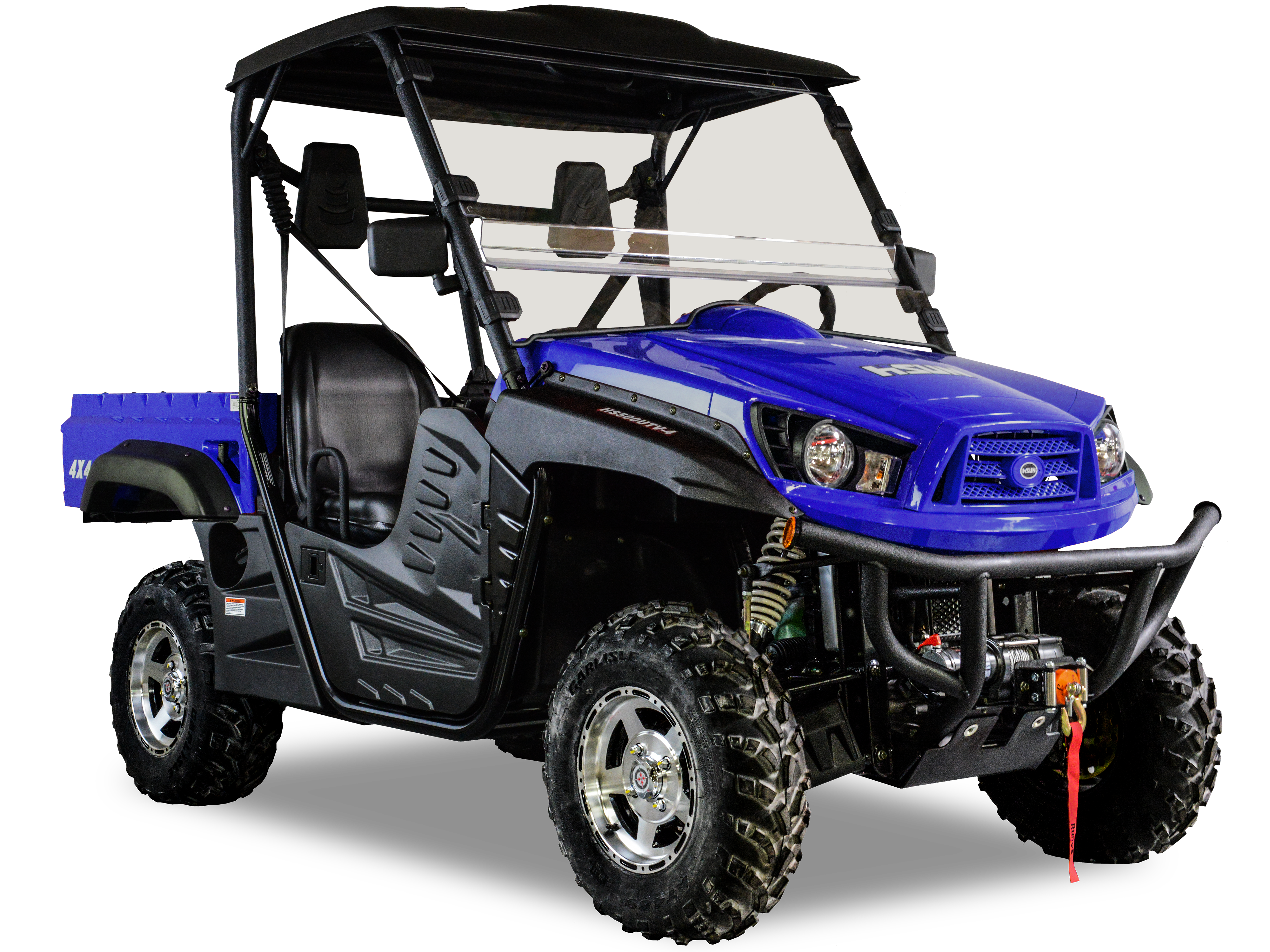 In the long run value is measured by performance and durability. Value is what the HS Series of Utility Vehicles have been delivering to enthusiasts world-wide since its introduction in 2006. The HS Series electronic fuel injected four-wheel-drive UTVs come in three different models/engine displacements; 400cc, 500cc, and 700cc.

CREATE YOUR REVIEW
HEAR WHAT OTHERS HAVE TO SAY
AVERAGE RATING
TOm Sawyer
I purchased my HS 500 through colman (different brand but same product) I am very pleased so far. Odometer is a 300 miles/80 hours. It brings the fire wood home and is a blast to roam the mountains in. It actually turns out more horse power than the sector 550 (30hp) HS 500(33.5). I had the shocks stiffened because of the extreme off roading that we do. But if you leave them at factory setting is a very comfortable ride. Speed wise it does max out at 40mph. Going up hills it will do 23ish. Suspension: You Only get 7.5 Inches of travel, Which does send it on three wheels sometimes on steep terrain. This and the fact that the rear axle is always locked( NO aspalt driving) and the Gear shift is difficult to get in Reverse, -these are my only Complaints. Weight capacity: I have had 1000+ pounds in it. its supposed to only be able to hold 850 summ pounds. THe bed is rated for 350lbs i have had it at 400+lbs, but make sure that its latched to the frame before loading it heavily or else... it will dump. I did that with my dog. Towing: Its Rated at 1200lbs. i have towed that much with trailer. ANd have drug half a rick behind using chains hooked to the hitch, bed full to roof of cab with wood. The vehicle is made for work and trail rides and preforms excellently. THe only malfunctions i had was a electrical error that made the transmissionn think that it was in reverse, thats fixed and no more problems. IF your looking for a snow plow try colman they've got one for $800. If your looking for a spare though just get one for a yamaha Rino it a lot cheaper. THe Terain where I ride (central arizona) is extreme. 70ft tall boulders, Washes, MOuntains made of graint, make it CHALLENGING to drive on. My hs 500 has exceeded my expectations. If you want to do some rock crawling and SERIOUS trail rides Then I RECOMMEND this product. PS. THe manual doesn't say it but the driver has to buckle or esle the vehicle will start lurching at 5mph.
Steve Boatman
It i a poorly built MACHINE,screws fallIng out, now been shop for repairs, dealer has trouble getting parts, also has a locked rear end,no way to unlock, had a plastic timing chain tensioerr break, and now have broken water pump, electric cooling fan burn’t out, now sensors are all bad on the efi
Marvin Buxton
Now let me get this straight first, I have the Coleman HS500 version, and it is the same as this. now let me tell you that this machine is a beast and is even better when you take modification to the max. I got it up to at least 50 mph on a flat runway that is about 7,000 feet and gets up to 35 mph in about 3 seconds on a flat surface. Now the only issue is that the 500cc is not as good for uphill over 45-degree angles that reduce the utv's ability to only go up hills with just the driver at an mph of 20-25. I suggest that everyone who makes a purchase for this will be satisfied just like I am and I am now at 85 hours of engine driving with a total of 108 miles of driving at the moment
tom sawyer
this is an update on my previous review. My MACHINE is at 134 hours, 580 miles. Bad on my part, i did not change its oil until 124 hours(your supposed to change every 40) it took the abuse in stride. I have continued to overload its weight capacity and its shocks have not sunk to far down. I have never found a boulder or slope It's little 471cc engine cannot climb. it also has some serious torque (drug a 6x4 trailer loaded with oak up a 200-foot 40-degree hill). you can spend 20k+ on a Fancy pancy, polaris rZR or CAN-AM Maverik, go ahead get your 150 hp but when your trail riding its no help. another advantage to the hs SERIES is its only 56 inches wide! countless times this has allowed me to fit between to trees where other utvs and side by sides cannot. the engine placement (right between the bucket seats) is much better for weight balance than the sector, ranger and defender. if you are missing your old yamaha rhino get the hs 500 or 700 its the exact same. Extra not DO NOT ADJUST THE ELECTRONIC GOVERNOR ITS THERE FOR A REASON THERE IS NO OIL PUMP IT RELIES ON SPLASHING WHEN YOU HIT THE HIGHER RPMS ITS NOT GOOD FOR THE ENGINE.
Stanley
I bought my HS500 one year ago. It's a wonderful machine. I ride with people who have fancy rzrs and machines that cost 4x as much as mine. i've never had a problem with it. my one complaint, the machine is noisy. i insulated the inside of the engine cover with sound absorbing material and that helped. i love it. i've had lots of fun with this machine.
‹ › ×